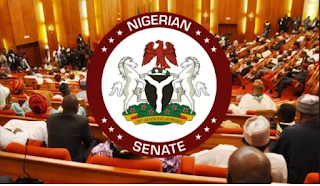 Traditional rulers from Yewa land in the Ogun West Senatorial District of Ogun State, led by the Olu of Ilaro, Oba Kehinde Olugbenle, returned to the Senate on Monday in support of their representative, Senator Tolu Odebiyi, who sponsored a bill on the establishment of the National Institute for Border Studies, in Imeko, Ogun West Senatorial District.

Other royal fathers in attendance to witness the public hearing organised by the Senate Committee on Tertiary Institutions and TETFUND, are the Onimeko of Imeko, Oba Benjamin Olanite Alabi; and the Aboro of Iboroland, Oba Daniel Salako.

The monarchs also stormed the Senate last week Monday in honour of Senator Solomon Adeola who sponsored three bills including the one on the upgrade of Federal Polytechnic, Ilaro to a full fledged university.

The proposed bill, apart from creating an academic institution, is aimed at solving the serious and mounting security and border challenges in the country.

The bill which is for the establishment of a global standard institution is the first in Africa.

Former Senators from Ogun West in attendance are Kola Bajomo and Iyabo Anisulowo.

Student bodies from across the country are also attending to give support to the bill.

The chairman of the Senate committee, Ahmed Lawan Kaita, said nobody objected to the establishment of the institute.