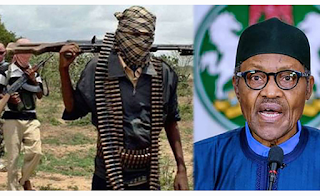 “Nigerians are being pushed to the wall by two things. Nepotism and sectionalism of this government and ethnic triumphalism that is going on; importing people from outside Nigerian who come into this country and decimating people in this country and no effort is being made to tackle the problem because some people think they are of a particular religion or ethnic nationality,” the senator stated.

Mr Abaribe added, “Under the watch of the present government, Fulani militias are on a mission of conquest all over Nigeria.”

Mr Buhari is being criticised for the widespread banditry, kidnapping for ransom, and killings across the country by killer herdsmen.

However, his media aide Garba Shehu claimed the worsening security situation was not a new problem.

Mr Abaribe expressed his view while speaking at the Owerri Branch of the Nigerian Bar Association 2021 Law Week.

He explained, “By infiltrating and trying to take over every region of this country, we have had to witness killings of natives, women raped, farmlands destroyed, kidnappings of citizens all over the country and forests forcefully occupied.”

While blaming the security for compromising instead of protecting the citizens, Mr Abaribe berated Mr Buhari for entrenching “nepotism and sectionalism” in Nigeria.

Speaking further, he noted, “The security forces that should offer protection seem to rather act as if they are in collusion with the criminals and this invading army being treated with seeming indifference.”

Peoples Gazette had exposed how the Director General of the State Security Service Salisu Bichi, Mr Buhari’s kinsman, conducted uneven recruitment of 535 northerners and 93 southerners into the SSS in 2020.

The Gazette also exposed Mr Buhari’s appointment of Abdulrasheed Bawa as EFCC chair despite his unconcluded case of theft.

Similarly, The Gazette reported how Mr Buhari illegally extended the stay of former Inspector General of Police Mohammed Adamu, replacing him with another northerner, Usman Baba Alkali, in gross violation of the Nigerian Police Act he assented to.

Thus, blocking the emergence of the only qualified southerner Moses Jitoboh as the police chief.