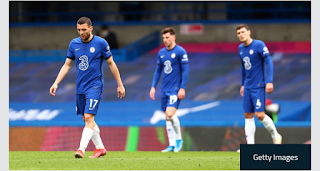 The Blues were hoping to strengthen their hold on fourth place but suffered a stunning 5-2 loss at home to Sam Allardyce's relegation-battlers.

Chelsea were given a brutal reminder of just how far they still have to go under Thomas Tuchel in Saturday's stunning 5-2 defeat by West Brom at Stamford Bridge.

The shock setback ended the Blues' 14-game unbeaten run under the German manager, and painfully underlined that securing Champions League qualification will be anything but a formality.

Having previously conceded just two goals since Tuchel took charge in January, Chelsea were expected to have little trouble keeping a clean sheet against a side sitting 19th in the Premier League table.

However, flaws remain in this squad, and they were brutally exposed by West Brom.

Chelsea's new attacking signings simply aren't impacting games as much as expected. Much of the focus has been on Timo Werner but more is also expected of both Kai Havertz and Christian Pulisic.

Hakim Ziyech, to his credit, had scored twice in the Blues' two games but he was hauled off immediately after Thiago Silva's red card just before the half-hour mark.

The 36-year-old defender was booked twice for two rash challenges but both of his tackles came after Jorginho had turned over possession in dangerous areas.

It summed up what was already a sloppy display from the hosts, even though they were 1-0 up at the time of Silva's dismissal, with Pulisic having tapped home a rebound after Marcos Alonso's fine free kick had come back off the post.

What followed was a stunning collapse, with Matheus Pereira scoring twice in first-half injury time, as Chelsea's 12-hour run without conceding a goal went up in smoke.

The effects of Silva's sending-off were obvious as a long punt upfield from West Brom goalkeeper Sam Johnstone was allowed to reach the feet of Pereira, who lobbed Edouard Mendy to make it 1-1.

Seconds later, both Jorginho and Reece James were at fault as Pereira was allowed several touches in the Blues' box before putting the visitors ahead.

Pulisic's goal did not prevent him from being replaced by Mason Mount at half-time, but things turned even worse for Chelsea as well-worked goals from Callum Robinson and Mbaye Diagne saw the Baggies open up a remarkable 4-1 lead.

Mount pulled a goal back after unselfish work from Werner, who now has more assists (11) than goals (10) this season in all competitions, but it was a case of too little, too late for the home side.

Indeed, Robinson struck again in added time as West Brom equalled their biggest-ever at Stamford Bridge, with the Baggies last winning 5-2 here in 1928-29.

A shell-shocked Tuchel was left with plenty of food for thought, telling BT Sport, "I did not see it coming, so now we have to take our responsibilities – me included – and shake it off."

However, it's a result that will take time to "digest", as the manager put it. Tuchel's positive and focused coaching methods had papered over the cracks from the Frank Lampard era but this game provided evidence that they will continue to reappear during the rebuilding job.

Given Chelsea have risen from 10th into the top four since Tuchel's arrival, one defeat is hardly a disaster and all of the momentum built up by the manager's good work to date will not be lost because of a poor performance, which, tellingly, arrived after the international break.

It was simply a reminder that this new project remains in its infancy, with too many top talents still underperforming.

Indeed, this most unexpected defensive disasterclass has probably taught Tuchel a valuable lesson about which players he can rely on – and, more importantly, those that he can't.