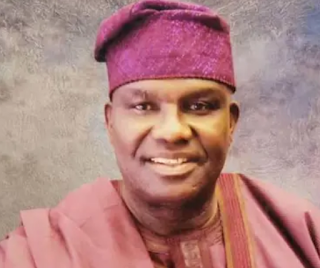 Akinyelure who stated this during a media chat with journalists in Akure, Ondo State capital, said National Assembly members should be absolved from the blatant disregard of Buhari to the federal character principles in appointments into key positions in the country.

The lawmaker who frowned over the concentration of the appointments allotted to the few ethnic hands in the country said this might be responsible for the disunity and division that exist amongst the diverse ethno-religious communities in the country.

According to him, “this is a glaring fact to all Nigerians, the APC and the man in charge, many of their policy had failed to comply with the federal character principle of engagement.

“This is because we cannot usurp the power of the executive because there are certain powers conferred on the president by the constitution and the president can hide under this power.

“So if these people are qualified for the positions, the National Assembly cannot but clear them. It is clear to all Nigerians that these federal appointments are not evenly distributed in line with the principle of federal character.”

He however advised that appointments into key positions should be evenly spread and devoid of religious, ethnic and regional considerations, saying this will help to foster national unity.

“Appointments into key positions must be on merit besides regional consideration to give every section of the country a sense of belonging.”

Speaking on bringing dividends of democracy to his people, Akinyelure said he had facilitated and distributed over 200 employment letters to graduates from the six local government areas in his senatorial district.

According to him, he had influenced the record employment of 496 graduates in the Senatorial district between 2011 and 2015 during his first coming to the hallowed chamber.

The chairman, Senate Committee on Ethics, Privileges and Public promised to continue to secure permanent employment opportunities for teeming unemployed graduates in his district just as he disclosed that over 400 unemployed constituents had been empowered through enterprise development since June 2019 when he returned to the Senate.

He said “I have provided palliative and empowerment materials worth millions of naira to artisans and less privileged in Akure South, Ifedore, Ondo East, Akure North, Idanre and Ondo West local government areas.

“I have also purchased a grader to grade rural roads in the district free of charge, while over 100km of roads linking farms and rural communities have been graded under my constituency’s projects.”

He advised the people of the state to shun voting out their National Assembly members unnecessarily to enable them to play the national politics properly and bring dividends of democracy to the people of the region.