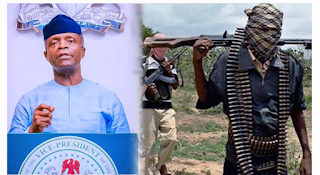 Vice President Yemi Osinbajo has told Nigerians not to complain and sound like biblical Israelites at the Red Sea amid violent killings and abductions across the country.

Mr Osinbajo claimed God would make Nigeria an “oasis of peace, security, and prosperity” in Africa and beyond.

“We must not sound like the children of Israel, fearful before Goliath, petrified and complaining at the Red Sea, as Pharaoh and his hostile hosts approached,” he urged.

Among the crises plaguing the country is acute insecurity and terrorism.

Last week, President Muhammadu Buhari’s regime and the ruling All Progressives Congress threw their weight behind Isa Pantami, the communications minister, despite damning reports exposing his link to terror organisations like the Taliban, Al-Qaeda, and Boko Haram. Mr Osinbajo belongs to the regime and the party.

In a statement on Sunday in Abuja, Mr Osinbajo’s spokesman, Laolu Akande, said the vice president spoke at the ongoing 108th Annual Convention of the Nigerian Baptist Convention in Lagos.

“That we will create here in Nigeria an oasis of peace, security, and prosperity, such as has never been seen before on this continent and beyond.”

According to him, the feat is not impossible for God to achieve.

“This is the promise of God. But today, the clouds are overcast. The promise seems impossible, as it was with the children of Israel after leaving Egypt on the way to the promised land.

“The journey to the promise of God for Nigeria is going through storms and adversity, but the end will be better than the beginning; weeping may endure for the night, but joy comes in the morning.

“I am completely convinced that nobody, no group, no ideology, can defeat the promise of God for the greatness of Nigeria. I see it clearly. I know it like my own face,” he said.