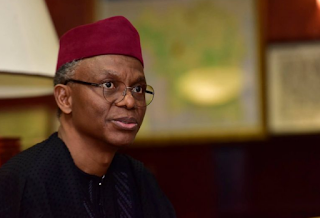 Of all governors of the northern states most challenged by insecurity, Kaduna  State Governor Nasir El-Rufai stands out in rebuffing any attempt at conciliation with bandits and insists on dealing them the harsh hand of law they deserve.

Late last week, he restated for the umpteenth time that he would pay no ransom – not even if his son were kidnapped. “Even if my son is kidnapped, I will rather pray for him to make heaven, because I won’t pay any ransom,” he said in a radio interview. At another forum, he had argued that bandits have lost their right to life under Nigerian constitution. “The bandits are at war with Nigeria and there is no other way to approach the current insurgency but for security forces to take the war to (them) and recover forests they are occupying,” he said

Earlier, his wife Hadiza advised kidnappers to perish the thought of abducting her. Late in March while visiting her farm, she tweeted: “At my farm today. Anyone thinking of **** me should not bother. The man has already warned me that he will not pay any ****” – putting the words ‘kidnapping’ and ‘ransom’ in asterisks.

El-Rufai’s tough talk was against the backdrop of pressure mounted on him to facilitate the release of students of the Federal College of Forestry and Mechanisation, Kaduna who were kidnapped by bandits on 11th March and are yet to regain freedom. The kidnappers have demanded N500million ransom payment, but the Kaduna governor insists on not playing ball or even negotiating with the criminals.

Parents of the kidnapped students are of a different view and are pressing the governor to soften up. A representative of the affected parents, Sani Friday, said they were afraid the bandits could kill their children should government deploy force to rescue the hostages. “(El-Rufai) made a statement before that he can do anything for the bandits to stop killing, so we want him to do something… The way we want the government to go about this is to negotiate. Even if they want to put any other security measure on ground, it should be after negotiation.” he argued inter alia on a television programme.

From the high ground of societal morality and legality, you can’t fault the Kaduna governor for his puritan disposition; actually, he deserves praise for taking a strong line away from the tendency that has fostered resilience in the bandits and encouraged their criminality. But it might help to tone down the aggressive rhetoric by which sheer non-compromise is flaunted as a badge of honour whereas not much has been achieved to forestall successful attacks by bandits. The Yoruba have an axiom that one does not interrogate the death that killed one’s father when you do not yet have the sword of revenge in your control. Hardball thinks that is one useful counsel to apply in this circumstance.