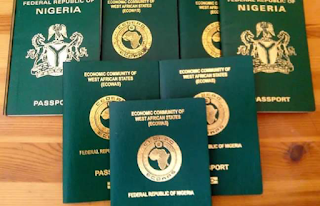 CIVIL society groups have condemned the scarcity and racketeering of passports by some Nigerian Immigration Service officials and their collaborators at the various NIS offices and commands nationwide.

The Executive Director, United Global Resolve for Peace, Olaseni Shalom, argued that the passport scarcity was artificial and meant to subvert due process and enrich the pockets of a few corrupt officers.

He stated, “Passport scarcity in Nigeria is artificial and man-made to subvert due process and enrich the pockets of a few corrupt Immigration officers who then charge non-official fees to fast-track the international passport applications of outwitted members of the public.

“It is a terrible scam that has become deeply entrenched in the application system and one that needs to be confronted with requisite political will and fervour to stem its occurrence.”

Shalom lauded the moves to begin local production of the passport booklets and noted that the nation had the capacity to handle such productions and processes “if those put in charge of these operations are properly oriented in their duty and sanctions are handed down at the least infraction to deter others.”