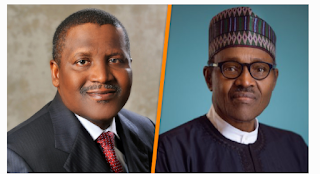 The tax credit certificates valued at N22.321 billion are for the construction of Apapa-Oworonshoki-Ojota road in Lagos and the Lokoja-Obajana-Kabba road connecting Kogi and Kwara States, The Nation reported.

This implies that Dangote Cement will provide the funding for the federal roads to cover for the tax that it would have paid.

The tax credit certificate for the Apapa-Oworoshoki-Ojota expressway is valued at N21.6 billion, while that of Lokoja-Obajana-Kabba is valued at N721 million.

In 2019, FIRS issued a tax credit certificate valued at N9.5 billion to the company for the Lokoja-Obajana-Kabba road.

FIRS’ Executive Chairman, Muhammad Nami, represented by the Coordinating Director, Tax Operations Group, FIRS, Femi Oluwaniyi, while presenting the certificates to Dangote Cement, said, “The government came to that reasoning that if we could encourage local investors to do the needful and of course under an agreement with some due monitoring and approvals then some of the monies they would have accrued back to government as taxes, they would have paid.”

Receiving the certificates on behalf of Dangote Cement, Ahmed Mansur, the Group Executive Director, Government and Stakeholders Relations, stated, “It is true that the responsibility of providing public services and public facilities like roads and electricity and so on is that of the state.

“But in today’s modern state, it is not possible to encompass every service that the public requires even if the states have the funds.”

Mr Mansur further explained, “While it remains the responsibility of the state, the ability of private sectors to also contribute their quota in terms of capacity to execute becomes a huge advantage and it is because of it that when the opportunity was offered by his excellency Mr President through this EO 07, we jumped at the opportunity.”