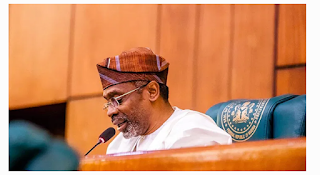 The communications minister has been under fire for his comments praising terrorist groups like Al Qaeda and the Taliban. The minister also said he was always happy whenever unbelievers were being killed, according to details uncovered by Peoples Gazette.

Calls for Mr Pantami’s resignation have intensified from the leading opposition party PDP as well as Governor Nyesom Wike. President Muhammadu Buhari and the ruling APC have yet to comment on the matter.

At the House plenary on Wednesday, Ndudi Elumelu (PDP-Delta) raised a point of order seeking a House debate that would lead to a demand for Mr Pantami’s resignation.

But he was subsequently shut down by Mr Gbajabiamila, an APC chieftain who claimed the opposition lawmaker did not raise the point in line with House rules.

“Your point of order is noted,” Mr Gbajabiamila said while overruling his colleague. No discussion was entertained on the matter afterwards.