Herder who cut off my wrist after challenging him for destroying my N2m rice farm is still free, police haven’t done anything –35-year-old widow - The Naija Weekly

Home Crime & Security Herder who cut off my wrist after challenging him for destroying my N2m rice farm is still free, police haven’t done anything –35-year-old widow

Herder who cut off my wrist after challenging him for destroying my N2m rice farm is still free, police haven’t done anything –35-year-old widow 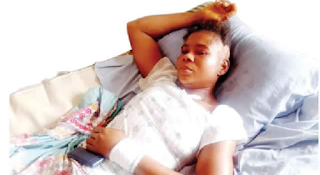 Amaka Okafor, a rice farmer in Ayede Ogbese community in the Akure North Local Government Area of Ondo State, was recently attacked by a Fulani herdsman on her farm while trying to prevent cows from grazing on her crops. She narrates her ordeal on her hospital bed in this interview with PETER DADA.

How long have you been living in this community and how old are you?

I have been living in Ogbese for the past 20 years. I am 35 years old and a widow. My husband died in an accident 10 years ago, when my son was a baby.

When did you start rice farming?

I started rice farming in 1993, but I started in Ondo State when I came here.

How do you do the farming, particularly for as a female?

When we cast the rice, we’ll put it in bed. Then, we’ll remove it and replant it. Before now, we were doing it on a small scale, because the process was cumbersome. But when the government started giving us chemicals for the weeding and brushing of the rice plantation, we started expanding and God has been helping me out.

Since you started, how has been your encounter with herdsmen?

Back then, the Fulani that used to come to the area where we are farming were not staying with us here in Ogbese. All they did was to come and go back to their base. Then we had peace with them; they didn’t have any problem with us. When they wanted to feed their cattle, they would approach us saying that they were interested in buying the haystack, which is the leftover grass of the rice. If we wish to sell to them, would sell the haystack, and at times, we gave them for free. Then, I used to keep my rice, which had been processed in the farm for over a month and sometimes three months. When I kept the rice there, only the grass would be eaten by the cows without tampering with where I kept the rice.

They even told me personally when they were leaving that I should not keep any of my things, including the processed rice, on the farm again. Since the new ones came, they have been disturbing us. There was a time when they told my workers and I that we were fools, because we cautioned them not to graze their cows on the rice farm again, because when they take their cows onto the farm, the rice will not germinate. We later reported the incident to their former leader in the community, one Adamu Adamu, who was able to stop them temporarily. But after the rice became mature for harvest, they again led their cows to farm to graze.

Do you have a rice farmers’ association in the community and why didn’t you report the matter to it?

We used to have an association. The association did not function again because its executive members were not honest with the things the government used to send to farmers as support. So, there is no association to report to again.

Have you informed the community about the development?

Yes. I’ve even lost count of how many times I’ve reported to leaders in the community and even the police. Even before we had a king, one of the princes in the community, Adekunle Oluyede, picked up the case. He insisted that the Fulani must be cautioned about their excesses in the community. Before now, we used to keep many of our things on the farm, but we dare not try such now.

On the day you were attacked, how did the events unfold?

In the morning around 8 o’clock, I informed my mummy that I would be going to the farm alongside one of my workers to spray pesticide on the newly planted rice. While I was spraying the plants at the extreme of the plantation, I saw four Fulani herding their cows into my farm. I immediately approached the eldest among them to warn his kinsmen from further advancing into the farm. I also reported to one of their leaders in the community called Isa, but to my surprise, he told me to go and be telling each Fulani one by one what I told him, and I said that was impossible because as a leader, he should be able to caution the others. But he told me that he won’t be able to do that, because they would feel he was taking sides with me.

Even during the last farming season, I ran at a loss because of the herders’ activities. As a rice farmer, I’ve been borrowing from financial institutions and individuals just to ensure that I’m not frustrated out of the business, but the herders are bent on destroying everything on my farm. I’m even confused now on how I’m going to repay all the loans. I decided to divide the farm into two and I used bamboo to fence the side where I planted the rice and decided to leave the other part for them to graze.

On that particular day, I was so weak because I did the job myself. But I noticed that the other Fulani complied with what I did but there was a particular boy among the herders, who always forced his way and cows into the farm despite the barricade. So, around noon when I was still spraying the rice plantation, I saw the same Fulani boy with his cows inside my farm and I challenged him as to why he would herd his cows into my farm to destroy all that I planted again.

I approached him and I told him nemesis would catch up with him in future and that God would judge him. He became angry and said: ‘What did you say?’ He said I was mad and he took out his cutlass to attack me, but I ran and he started chasing me and I began to shout. As I was running, l fell to the ground. He caught up with me and raised the cutlass to cut my neck but I blocked it with my hand. My wrist was almost cut off; I have a very deep cut on my wrist and my head.

When he saw one of my workers running towards the direction, he commanded the cows and all of them ran away. It was my worker who assisted me to tie the wrist with my cloth and raised the alarm for the other workers to come and assist me to the hospital. They washed my face with water because the blood was too much. I later called the Divisional Crime Officer of the community to inform him of the development. When I got to hospital, the doctor really tried for me because the vein had been cut.

What steps have the police taken since you informed them?

Nothing has been done up till now; the boy has not been arrested and he’s still in his father’s house here in Ogbese. The leader of the Fulani in the state was also informed and he promised to confirm the situation, which he did. The policemen in the community know the boy and his father very well, but they’ve not invited or arrested them.

Are you saying you know the boy who attacked you?

Yes, I do. I don’t know his name, but I know him very well; the boy is in his 20s. He and his family members live in this community.

Before the incident, have you had any encounter or altercation with them?

No, some other Fulani used to play with me on the farm. I do give them water to drink most times. They are friendly with me. But the family of the particular boy, who attacked me, are the problem in the community. They don’t play or relate with anyone. They’re the ones who always attack people in the community.

We learnt that you once had an issue with some herders, who invaded and destroyed your farm, and that you were able to seize a cow while the herders ran away, how did it happen?

Yes, on that particular day, I went to the farm and I met a lot of cows on the farm. What got me agitated the most was that the herder, known simply as Alhaji, did not only allow his cows to eat the planted rice but went to where I stored the rice that had been processed and started tearing up the bags to feed his cows. That’s deliberate wickedness. I had to invite the police, who later helped me to pursue them. While they could not arrest any of the herders as they ran away, I was able to catch one cow. We took the cow to the police station. But the Fulani leaders later came and apologised that I should forgive them. I was not even compensated.

How much do you invest in the farm annually?

I do invest between N1.5m and N2m. I got it through loans. I always pay back any time I harvest and sell the rice. My farms are over seven hectares.

With this incident, what is your appeal now?

I want serious attention from the government on this matter, especially in Ogbese. The Fulani attacks on us are too many. They will attack, rape and destroy our things. A few months ago, they raped one woman in this community and up till now, no one has been arrested. The Fulani are just too many here in Ogbese with over three million cows. I also want to appeal to the government to assist me. I’m a widow with a child and an aged mother, who I’m taking care of. If you have an encounter with the Fulani, they will still come after the person; many people have cases with them. I need protection as well as financial assistance, because as it is now, I have loans to repay; the herdsmen have destroyed my farm, how will I repay the loans?  Now, I’m fed up. I think it’s time I quit; I want to leave Ondo State entirely. The debt will be too much for me to bear.