Hunger will kill me, daughter, grandma if I don’t hawk in Lagos traffic – 26-year-old single mother amputated at 11 - The Naija Weekly

Home GIST/VIRAL Hunger will kill me, daughter, grandma if I don’t hawk in Lagos traffic – 26-year-old single mother amputated at 11

Hunger will kill me, daughter, grandma if I don’t hawk in Lagos traffic – 26-year-old single mother amputated at 11 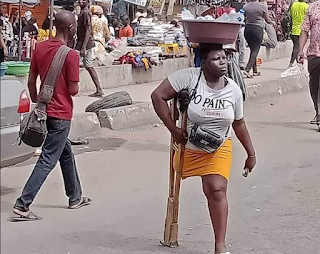 Buoyed by the resolve to stave off hunger and live on her own sweat, Mary Daniel finds infinite strength in her frailties. Being an orphan and walking with one leg supported by a crutch is not enough for the 26-year-old to compromise her values. Come what may, she has vowed not to beg on the streets since fate dealt her a huge blow at 11.

That unflinching resolution makes her eke out a living on the highways in Oshodi, one of Lagos’ busiest cities, hawking bottled water in terrible traffic to cater to herself, her two-year-old child and aged grandmother.

It was 2.30pm on Friday when our correspondent arrived at a complex on Suwebatu Street, Oshodi, where she buys bottled water on credit and pays after sales.

About 5 pm, she wobbled on her crutch into the complex with an empty black bowl dangling on her left hand. The single mother had just returned from another round of strenuous peddling; a fourth in the day.

Encounter with fate at 11

Growing up in Katsina State where she lived with her parents, Daniel nursed dreams of a regular child. She wanted to have formal education and aspired to a great future. She was in Primary four when her beautiful hopes were dashed in December 2006 on the highway.

That fateful day, she and her parents were travelling to their country home in Ayingba, Kogi State, for Yuletide, when they were involved in a fatal accident.

Her parents and some others died in the crash that crushed her right leg. That was all she could remember until days later when she was left with a leg.

“I was just 11-year-old then so I couldn’t really remember everything that happened,” Daniel said bleakly as she narrated her plight to our correspondent inside the complex in Oshodi. “My leg was shattered and it had to be amputated. Doctors said I would die if it was not cut,” she remarked grimly, adjusting her position on a bench she sat on.

She added, “My siblings didn’t travel with us that year. My younger brother, Godwin, is now living with my aunt in the village while my elder sister, Esther, lives in Abuja. She’s married but living from hand to mouth.”

Months after her leg healed, Daniel reawakened her dying dreams. She relocated to the village and returned to school. But just when she thought she was on the right track to success, another bombshell dropped.

“I dropped out at JSS 3,” she mumbled. “I was going to school on a government scholarship but they stopped paying my fees. That was 2014.”

Thereon, she sought solace in hawking, moving from Anambra to Delta and then Lagos.

She recounted, “I relocated to Onitsha (Anambra State) and started selling sachet water. I use the gains I make to feed myself and send some money to my grandmother in the village. She is over 70 years old and I don’t want hunger to kill her.

“In 2018, grandma told me a man in the village wanted to marry me and she asked me to come home. While we were dating, I got pregnant but he denied being responsible for the pregnancy.

“Out of shame, I relocated to Asaba (Delta State) and continued hawking sachet water. I squatted with a woman from our village for some months before I rented an apartment.

“A car brushed my arm while I was hawking in traffic. I was heavily pregnant then. One man saw me bleeding and gave me N100,000. I used the money to rent a small apartment and bought some baby things. I gave birth in 2019.”

She only had a two-week ‘maternity leave’ before she returned to the streets, manoeuvring the traffic to sell water with her baby strapped to the back.

She continued, “I decided to come to Lagos about two weeks ago because I was not selling well in Asaba. I sold my home appliances to raise the fare. My daughter is with the woman I lived with in Asaba. She is now in Ayingba with my baby. My grandma didn’t know I am now in Lagos. Last week, I sent N8,000 to my grandma and I want to send N10,000 to her again this week. I am the only one taking care of her.

“I met with a woman selling noodles and I explained my plight to her. She linked me up with one Alhaja from whom I buy packs of bottled water. I buy a pack for N600 and make N240 gain. I sell six to eight packs per day and make a profit of N1,000 to N1,500. I save N500 daily. I want to send the money for the upkeep of my daughter at the end of the month.”

Bottled water not paid for in traffic

Twice, passengers had gone with her money while waiting for them to pay after giving them water.

“The first time was on Wednesday and today (Friday). The vehicles they were in moved when the traffic eased off and I couldn’t run after them to collect my money,” she added.

Daniel also takes a fair slice of the risks that come with street trading. Tactful navigation around gridlock is an art any regular trader must learn in traffic to avert deadly hazards. And Daniel has learnt to be more adept at it given her vulnerable condition.

“I hawk in traffic around Terminal 1, Bolade and markets around Oshodi,” she disclosed. “I wait for traffic to be standstill and dash to the road to sell to commuters. I will retreat to the roadside once the traffic eases off and returns immediately there is another standstill. It is stressful but I use drugs in the evening to kill pains.”

Passing the nights on the balcony

Even night is not a comforter for Daniel after an onerous task in the day. She sleeps outside under the cold and grating sound of mosquitoes feasting on her.

“I sleep on the balcony and passage of a house over there,” she said, pointing at a storey building on Suwebatu Street. “I hardly sleep at night because of mosquitoes,” she lamented, before breaking down in tears. “So I usually pray at night,” she added after a long pause.

Daniel said she always takes a short nap after the first round of hawking in the morning to make up for the sleepless night.

Despite being an orphan and physically challenged, Daniel is not bogged by her adversities. “I don’t like begging because I believe I have the strength to work and cater for myself,” she declared. “I know I am not lazy and I took the decision not to beg. Some who are begging don’t even make as much as I do daily. Some people, out of pity, will gift me N1,000 or N2,000 after buying water from me.”

She added, “I wish to have a shop of my own so that I can have a better means to take care of my daughter and grandma. I used to have one artificial leg but it was painful whenever I wore it. So I decided to be using a crutch.”

A drink seller, Alhaja Bolanle Gafar, from whom Daniel collects bottled water daily, told Saturday PUNCH that she initially turned down the single mother’s request when she approached her.

She explained, “I saw her about two weeks ago on the street. The next day, a neighbour brought her to me. She said she would be buying bottled water from me to hawk. I was surprised because even people who are not physically challenged always complain that hawking is stressful. I initially turned her down but she insisted that I should sell to her.

“I gave her one pack but she requested more. I declined but she insisted I added one more pack. She wanted me to add a bag of sachet water but I completely refused. I kept wondering till she came back after selling everything. She paid and went with another two packs. She did six rounds that day. At times, she does seven or eight.

“Whenever I tell her to slow down, she will say she needs to hustle. She goes far distances to hawk.”

Another trader, Mrs Amudalat Oyinkansola, said she was amazed at Daniel’s confidence and her determination to succeed.

She stated, “About two weeks ago, she entered the complex one evening and greeted me. She narrated her situation to me and I felt really bad. I was amazed at her confidence. She said she is grateful she is still alive and that she will prosper one day. She said she wanted to be hawking bottled water and I told her to come the next day. I introduced her to Alhaja.”

A noodle seller who Daniel first met with in Lagos, Mrs Adeleke Olowoora, said she offered her a stand to display her wares but she insisted on hawking to drive sales.

Olowoora explained, “She came to my stand with a bag around 5pm and sat by me. She bought noodles. When she finished eating, she told me she came to settle in Lagos but she had nowhere to sleep.

“When I was going home, I begged a man, Mr Felix, to help me look for somewhere she could sleep. I wanted to take her home but I was afraid. She has been sleeping on the balcony of the man’s rented apartment on Suwebatu Street. Mosquitoes are disturbing her but I told her to endure.”

The resident, Felix Aku, said on Daniel’s first day in the neighbourhood, he wanted to take her to a makeshift structure where people pay a token every day to pass the night.