I withdraw my support for Pantami, a lover of bloodshed: Fani-Kayode - The Naija Weekly

Home Articles I withdraw my support for Pantami, a lover of bloodshed: Fani-Kayode

I withdraw my support for Pantami, a lover of bloodshed: Fani-Kayode 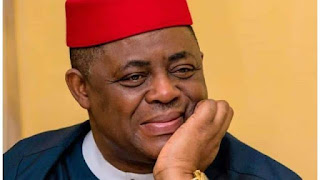 Former Minister of Aviation Femi Fani-Kayode says he has withdrawn his support for Isa Pantami, the under-fire Minister of Communications and Digital Economy.

The controversial politician had earlier thrown his weight behind embattled Mr Pantami, facing public opprobrium for his avowed links to terror organisations and extremist views.

Mr Fani-Kayode has, however, changed his mind pointing out that Mr Pantami’s so-called remorse is superficial.

On Thursday, on his Facebook page, Mr Fani-Kayode affirmed, “He (Mr Pantami) is a religious bigot, an ethnic supremacist, an unrepentant jihadist, a lover of bloodshed, carnage and terror and a psychopathic and clearly insane individual.”

Shedding light on his previous stand with Mr Pantami, the ex-minister under ex-President Goodluck Jonathan’s administration noted further, “I considered giving Pantami a soft landing a few days ago and opted to forgive him for his offensive, dangerous and repugnant vituperations only because he had publicly expressed his regrets, but this is no longer the case because his expression of remorse was clearly not genuine or heartfelt.”

The former minister also suggested that the authorities should arrest and prosecute Mr Pantami for his extremist views and links to Al-Qaeda and the Taliban.

He added, “Pantami is not fit to be a minister of the Federal Republic, but he is also not fit to walk our streets freely.”

Earlier on April 16, Mr Fani-Kayode had tweeted regarding Mr Pantami, saying, “I refuse to believe that he said this. If he did, then he is nothing but a cold-blooded killer & terrorist who deserves to face the full wrath of the law.

“If he didn’t, may God judge those that have falsely accused him. Until I see the evidence, I refuse to believe he said it.”