Lagosians groan over bad roads in Ojo - The Naija Weekly 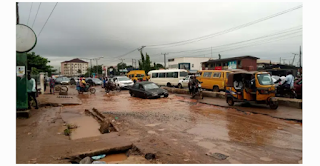 Some residents, motorists, and other road users in Okokomaiko, Ajangbadi, Jakande/Agboola communities within the Ojo Local Government Area of Lagos State, have expressed concern over the deplorable state of roads in their areas.

The residents, who spoke to the News Agency of Nigeria (NAN), on Tuesday appealed to the state government to rehabilitate the roads and save them from the daily hardship.

They also called for the urgent reconstruction of inner roads and link roads around the communities to reduce flooding whenever it rains.

Some residents told NAN they are facing lots of hardships on these roads, hence rehabilitating these roads will ease the burden they undergo in the process of carrying out their daily activities.

An aggrieved resident, Mark Tunde expressed sadness over the pathetic state of the roads, saying that driving from his home to his workplace in Victoria Island, Lagos on a daily basis was hell.

”My vehicle has constantly developed faults, a development that has now forced me to resort to regular use of commercial vehicles.”

Many people who work outside the area have to set out very early, so as to get one of the few buses that come around because of the bad roads.

“It has made many commercial vehicles to avoid the area.“We need help on these roads as soon as possible because the rains will soon start,” Mr Tunde said.

A commercial bus operator, Ayanniyi Alobalola, said that the poor state of the roads had affected the conditions of buses plying the area.

“This is the reason we increased fares. Before the roads got this bad, bus fare around here used to be N100 but now, it is N300.

”When we drive through these roads, one has to go for repairs. We don’t ply the roads when it’s raining because it won’t be accessible,” he said.

Also a businesswoman, Alhaja Mokran, who deals in assorted non-alcoholic beverages, said the deplorable situation of the roads was affecting her business.

On his part, a landlord, Adekunle Adedigba, said that road users and residents of the roads have been having it tough going through the roads, describing their experiences as `great difficulties’.

According to him, pedestrians also find it difficult to use the road whenever it rains.

Mr Adekunle also said that many tenants have left the communities as a result of the problem of the roads.

“This is why there are many vacant houses and shops for rent. We need urgent rehabilitation of the roads before the rainy season because when the rain comes it would be worse.”

The conditions of the roads have already plunged residents into difficulties,” he said.

When contacted, the Chairman of Ojo Local Government Area, Olusola Rasulu, acknowledged the poor situation of the roads, but said it would cost the council a huge fortune to rehabilitate.

“Agboola road is a very long road that links other routes, it is between Otto-Awori and Iba LCDA, the road is too long and it’s a very huge project to embark upon as a local government, it is a state road.

“Although when such a road is rehabilitated with drainage inclusive, then it will ease difficulties faced by the residence.

“My administration and my predecessors have been grading the area but grading it is not solving the problem, the roads need a permanent solution.

“I appeal to the state government to release funds for such a project to be executed once and for all,” he said.