Nobody can unilaterally choose my successor, says Wike - The Naija Weekly

Home News Nobody can unilaterally choose my successor, says Wike

Nobody can unilaterally choose my successor, says Wike 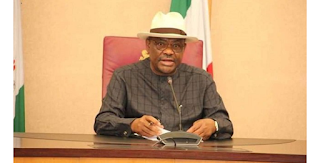 Rivers Governor Nyesom Wike has said that no individual can unilaterally decide who will succeed him and where the governorship ticket will be zoned to in 2023.

The Governor said at the appropriate time stakeholders of the Peoples Democratic Party (PDP) would meet and adopt a common position on such sensitive issues.

Wike spoke during the grand finale of the PDP local government campaign for the 17 April council election at State School 1, Bori, Khana LGA on Saturday.

He said: “I don’t want to talk about politics of who is from here and who is not from there.

“At the appropriate time the PDP family will sit down, the leaders of the party will sit down and look at everything together and then take a decision, not one man and even me as a Governor can say this is where we are zoning it to.

“You cannot say that. It is not your father’s property. So nobody should panic. It is not for one man who thinks he owns Rivers State. Somebody said he is going to give governorship slot to the Kalabaris, now it’s no longer to the Kalabaris but to the riverine area.”

He insisted that the All Progressives Congress (APC)-led Federal Government had failed Nigerians by not keeping to its social contract with the people of the country.

He called on Nigerians not to listen any longer to empty promises of APC.

He said: “Time has come when you make a promise to the people you must fulfil the promise. Time has come that we can no longer listen to empty promises of politicians like what the ruling party is doing today.

“When they came in 2015 they told Nigerians that the naira and dollar will be equal. N1 to 1dollar. Today what is the equivalent, N500 to 1dollar.

“They said they will create jobs, today Nigeria has the highest unemployment rate in Africa 33 percent.

“While would there not be crisis. They said when they come they will make sure insurgency is stopped, see what we are passing through today in this country. Everyday, killing upon killing. So, they have failed us.”