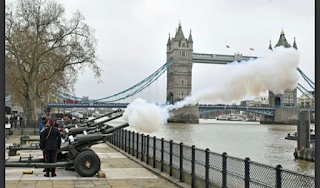 Gun salutes echoed around the United Kingdom on Saturday as the military paid solemn tribute to Queen Elizabeth II’s husband, Prince Philip, after his death aged 99.

Coordinated 41-round salutes to the former Royal Navy commander were fired at one round per minute from 12:00 pm (1100 GMT) in London, Edinburgh, Cardiff and Belfast, as well as at naval bases, from ships at sea and in the British territory Gibraltar.