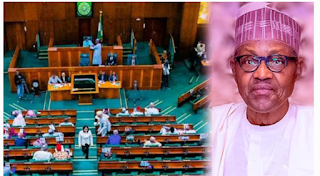 Despite a humongous debt profile, the House of Representatives on Thursday passed an additional $1.5 billion and €995 million external loan requests of President Muhammadu Buhari.

The fresh loan is approximately N1 trillion at the official exchange rate.

Peoples Gazette had in March reported that Nigeria’s total public debt under Mr Buhari’s regime rose to N32.915 trillion in December 2020, from N32.222 trillion in September the same year.

However, the Director General of DMO, Patience Oniha, in defence of the borrowings, explained that the decline in revenue generation occasioned the federal government’s increased level of borrowings since 2015.

She added that the borrowings, on the decline since 2018, had to increase again due to the COVID-19 pandemic.

The loan approval was granted after the chairman of the House Committee on Aids, Loans and Debt Management, Ahmed Dayyabu, urged the parliament to consider a report “on the request for the approval of external loans to finance the priority projects of the federal government.”

The committee last week presented its report to the House for consideration.

The report submitted by the committee also recommended that the terms and conditions as contained in the loan agreement be forwarded to the National Assembly for documentation.

The committee recommended that lawmakers should “approve the External Borrowing Plan of $1.5bn and €995m’ and ‘that the terms and conditions of the loans from each lender as contained in a duly executed loan agreements be forwarded to the National Assembly for proper documentation.”

Mr Buhari had while presenting the fiscal plan for 20201 to parliament in October, projected N2.183 trillion for servicing of the country’s domestic debt and N940.89 billion for repayment of its foreign creditors.

Despite limited funding allotted to capital projects, the government will finance the budget’s projected deficit of N4.98 trillion mainly by borrowing.

Experts have frowned at the country’s rising debt profile, expressing fears over the repayment plan given the revenue shortfall occasioned by declining oil prices.