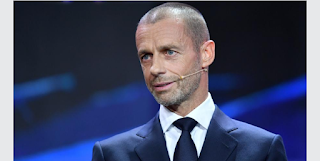 Uefa president Aleksander Ceferin on Tuesday told the English Premier League's "Big Six" clubs who have joined a breakaway European Super League that they had made a "huge mistake", and urged them to think again.

Speaking at Uefa's congress, the Slovenian criticised the attitude of owners who he said view the game as a "product" and fans as "consumers" but then spoke directly to the Premier League rebels.

"I would like to address the owners of some English clubs. Gentlemen, you made a huge mistake. Some will say it is greed, others disdain, arrogance or complete ignorance of England's football culture, but actually it doesn't matter," he said.

"What matters is that there is still time to change your mind, everyone makes mistakes, English fans deserve to have you correct your mistake, they deserve respect."

Manchester United, Liverpool, Manchester City, Tottenham Hotspur, Chelsea and Arsenal have signed up to the 12-team Super League along with top Spanish and Italian clubs.

"England, this incredible nation with such strong and unique links to football, deserves to have you correct your mistake. It deserves respect," Ceferin added.

"Correct your mistake, turn back, come to your senses. Not out of love for football – because I imagine some of you don't have much of that – but out of respect for those who bleed themselves dry so that they can go to the stadium to support their team and want the dream to be kept alive. Do it out of respect for the English people, for the home of football."

While Ceferin's comments make clear that the door is obviously open for the clubs to come back into Uefa's Champions League fold, he made a broad attack on what he considers the thinking behind a closed league with permanent membership for elite clubs.

"Champions League elimination for some is no longer a sporting failure, it is an industrial risk that some are no longer willing to take," he said.

The Slovenian said the leading clubs should recall their histories.

"Where were Manchester United in the decade before Sir Alex (Ferguson) arrived on the scene? You remember, I’m sure you do. And where were Juventus 15 years ago? As much as I know, they were in Serie B," he said.

"If the clubs that dominated European football 30 or 40 years ago had decided to form a Super League, what would it have looked like? Nottingham Forest, Aston Villa, Hamburg, Steaua Bucharest, Porto, PSV (Eindhoven), Red Star (Belgrade)... These were Europe’s cream of the crop back then.

"That would be a Super League, but football changes and some do not understand, they see only changes in their bank accounts.

"Those clubs who think they are big and untouchable today should remember where they came from."