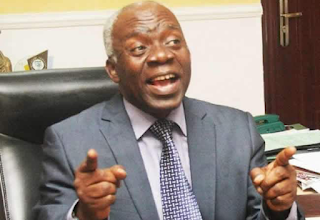 Falana said this during an interview with The PUNCH on Friday while reacting to the controversy surrounding Saab’s case.

Twitter had earlier in the week suspended the accounts of some Nigerian influencers for launching a media campaign for the release of Saab, a close ally of Venezuelan President, Nicolas Maduro, who is wanted in the US for alleged money laundering.

Saab was arrested in Cape Verde on his way from Iran on the request of the US but Falana instituted a case against Cape Verde before the ECOWAS court in Abuja and won.

Switzerland, where Saab allegedly stashed stolen funds, also recently dropped a probe, stating that it could not find any evidence of fraud.

The ECOWAS court ordered the immediate release of Saab and instructed Cape Verde to pay him $200,000.

Cape Verde has, however, ignored the judgment of the ECOWAS court while he continues to battle extradition charges in the country.

Speaking with our correspondent on Friday, Falana said, “The allegations against Saab are politically motivated by the US. He is being targeted because of his relationship with Maduro. They asked Switzerland to investigate him for money laundering and nothing was found.

“In any case, the man is still presumed innocent. He was an ambassador and had diplomatic immunity and yet they arrested him.

“Cape Verde lost at the ECOWAS court and is now in contempt for refusing to release Saab.”