Was Fernandinho lucky not to see red for incident involving Mason Mount? Alan Shearer and Ashley Cole give their verdict - The Naija Weekly

Home Sports Was Fernandinho lucky not to see red for incident involving Mason Mount? Alan Shearer and Ashley Cole give their verdict

Was Fernandinho lucky not to see red for incident involving Mason Mount? Alan Shearer and Ashley Cole give their verdict 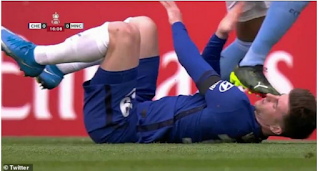 Fans expressed their anger on social media at the decision not to send off Manchester City midfielder Fernandinho following an incident with Mason Mount in the first half.

With Mount on the ground, Fernandinho’s boot made contact with the face of the Chelsea midfielder but Mount did not make much of it and referee Mike Dean took no action.

Fans reacted angrily online, viewing the tangle as deliberate or intended to wind up Mount, but former Newcastle striker Shearer played it down.

Shearer said: “He tries to pull his foot out of the way, he just does enough to get it out the way so no, nothing in that.”

Fellow pundit and former Blue Ashley Cole added: “Mason wasn’t touched or touched hard enough (for it to be a red card) but you’re playing in a semi-final so tempers flare. Hopefully tempers will flare more in the second half!”