Your report on Lekki shootings misleading, Falana tackles US - The Naija Weekly

Your report on Lekki shootings misleading, Falana tackles US 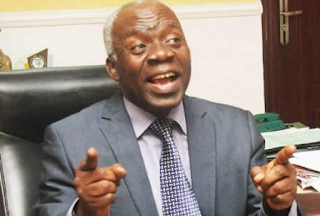 A human rights activist, Femi Falana (SAN), has faulted a report by the US Department of State on Lekki shootings.

The US report released on Tuesday had claimed that there was no accurate information on the Lekki shootings that happened on October 20, 2020.

The report also claimed that though soldiers fired live ammunition “to disperse” #EndSARS protesters, there is no verifiable report on the number of fatalities.

Reacting, Falana said the US report on Lekki toll plaza incident is “contradictory and misleading”.

The lawyer also described the report as prejudicial, saying that a panel of enquiry had been set up by the Lagos State Hovernment into the matter.

The report has attempted to cover up the brutal killings at Lekki and other parts of Lagos from October 20-27, 2020. It is a very contradictory report. On the one hand the report claimed that the members of the security forces were enforcing curfew by firing into the air to disperse protesters at the toll gate. On the other hand the report stated that some protesters had turned violent after criminal elements infiltrated them and so the security forces forces fired protesters at the Lekki Toll Gate. The report did not mention the detachment of the Nigerian army which perpetrated the mayhem. Do soldiers shoot into the air to enforce curfew in the United States?

The media should stop treating our people like colonial subjects by celebrating a foreign report that is subversive of the rule of law in Nigeria. How can the United States Government be allowed to treat the proceedings before a properly constituted Judicial Panel of Inquiry so contemptuously? The report is prejudicial in every material particular. It should be ignored by the Judicial Panel as it is designed to preempt the evidence being adduced by the survivors of the barbaric attack. The report did not acknowledge that the Nigerian army which initially denied that soldiers were present at the Lekki toll gate later turned round to admit that they were there but fired only bland bullets. The Americans should update the report by explaining how casualties and amputees were recorded when the soldiers only shot into the air.

Fortunately, more credible reports on the Lekki killings compiled by the progressive media outfits in Nigeria including The Punch, The News, Sahara reporters and Premium Times have been published. To their credit, these media bodies have published detailed stories on the killings. Apart from the confirmation of the cold murder of two people by Governor Babajide Sanwolu of Lagos State a senior surgeon from the Redington hospital has given evidence of the protesters that were treated for gun shot wounds. Is the United States Government not aware of the fact that some amputees who lost their legs as a result of the shooting have appeared before the Lagos Judicial Panel of Inquiry?

Following the dumping of scores of corpses from October 20-27, 2020 did the Lagos State Government not invite people whose family members were missing to identify the corpses at the Lagos State mortuaries? Did the Alliance on Surviving Covid-19 and Beyond ASCAB not disclose that there were 98 corpses dumped in the mortuaries? From the information at my disposal, three of those corpses have been traced to Lekki. I also know a lady who disclosed that her adopted son died of gunshots at Lekki toll gate. My law firm has taken up the case of a 28-year old lady who collapsed at Lekki with head injury and later died at a hospital in Lagos. The names of the casualties and amputees will be revealed at the appropriate time. Even President Buhari told the meeting of former leaders that 69 people including 51 civilians, 11 police officers and 7 soldiers had been killed in the unrest. The President did not say if the figures included the protesters allegedly killed by Nigerian army in Lagos. Did the United States report probe the breakdown of the official figures? So, why should I rely on the very unreliable report compiled in Washington on the genocidal attacks on unarmed protesters by soldiers from the Barracks who were illegally deployed by the immediate past Chief of Army Staff, General Tukur Buratai?