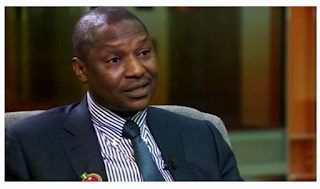 The Attorney-General and Minister of Justice, Abubakar Malami, has donated a Peugeot 406 car and 24 motorcycles to selected Ulamas in Kebbi.

The publicity secretary of Khadimiyya for Justice and Development Initiative, Ibrahim Abubakar-Jombali, a Non-Governmental Organisation (NGO), founded by the minister, made this known in a statement on Monday in Birnin Kebbi.

In the statement, Mr Malami described Ulamas as critical stakeholders in ensuring peace and unity in the country.

While presenting the donation, the minister, represented by his personal assistant, Nafi’u Yakubu- Lugga, said that the Ulamas deserved every support and encouragement as the first point of every child’s spiritual and moral guidance.

He also urged them not to relent in praying and preaching for the peace and unity of the country.

Mr Malami is being tipped for the governorship of his home state, Kebbi.

A report also indicated that he was eyeing Nigeria’s presidency in the 2023 general election. His donations could be viewed as incentives to warm himself into the hearts of the electorate in Kebbi.

Earlier, the national coordinator of the NGO, Malami Abdulqadir, congratulated the beneficiaries and commended Mr Yakubu- Lugga for facilitating the distribution of the items.

He described Mr Yakubu-Lugga as a loyal personal assistant committed to the ideals of his principal.

Also speaking, the manager, Kadi Malami Foundation, Yahaya Koko, described the numerous acts of philanthropy embarked upon by the AGF as something he inherited from his late father.

“The gesture to the Ulamas is not the first of its kind as the two NGOs have been executing meaningful projects that have a direct bearing on the lives of citizens,” he said.

Also speaking at the event, the chairman, Kebbi State League of Imam and Ulamas, Sheikh Ibrahim Umar-Bayawa, commended the minister for his various interventions.

He said the gesture would encourage them to redouble their efforts in imparting knowledge and preaching the gospel of peace in society.