Abiodun commiserates with Adeboye over son’s death - The Naija Weekly 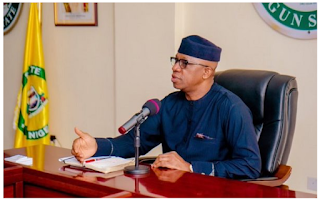 Ogun Governor Dapo Abiodun has commiserated with General Overseer of the Redeemed Christian Church of God(RCCG), Pastor Enoch Adeboye, over the death of his son, Dare Adeboye.

Dare, 42, the third child of Adeboye, was reported to have died in his sleep on Wednesday in Eket, Akwa Ibom State, where he was based with his family.

The deceased, who was Assistant Pastor in charge of Region (Youth) 35, was said to have ministered the previous day and had returned home to sleep from which he passed on.

The Governor, in a statement by his Chief Press Secretary, Kunle Somorin, on Thursday, expressed shock over the death of the young, vibrant and spirit-filled pastor, who according to him, was a role model not only to the youth in the RCCG, but in the country.

Abiodun, who paid a condolence visit on the respected cleric, described Dare’s death as heart- wrenching and shocking, saying he was one of the people who had followed the spiritual trajectory of the young pastor in the vineyard of God.

While expressing his condolences to Adeboye, Abiodun equally commiserated with the entire RCCG family.

He urged Pastor Adeboye to take solace in the fact that Dare served and died in the service of God, noting his footprints in the church will forever remain indelible.

Abiodun also prayed that God gives the Adeboye Family the fortitude to bear the irreplaceable loss and strengthen the church, in this time of God’s trial.