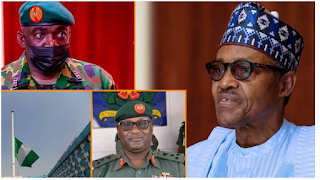 Following the death of Nigeria’s Chief of Army Staff Ibrahim Attahiru and other military top brass who died in a plane crash on Friday, President Muhammadu Buhari has ordered the national flag be flown at half-mast to honour the deceased.

“His Excellency Muhammadu Buhari Commander-in-Chief of the Armed Forces, Federal Republic of Nigeria has authorised the national flag should be flown at half-mast in all public buildings facilities and official residences with effect from Monday 24th May 2021 to Wednesday 29th May 2021,” said a statement by Boss Mustapha, the Secretary to the Government of the Federation.

Mr Buhari was absent at the burial ceremony of his Mr Attahiru. However, he expressed his shock over the loss of the army chief and others killed in the crash through a statement by his media aide Femi Adesina.

An Islamic funeral service was held at the National Mosque, Abuja, for the late army chief and five others.

Christian burial rites were held at the Nigerian Air Force Protestant Church, Abuja, for the other military officers.

The deceased were buried at the National Military Cemetery, Abuja, on Saturday.