After Meeting in Asaba, Southern Governors Reveal Next Step to Take - The Naija Weekly

Home News After Meeting in Asaba, Southern Governors Reveal Next Step to Take

After Meeting in Asaba, Southern Governors Reveal Next Step to Take 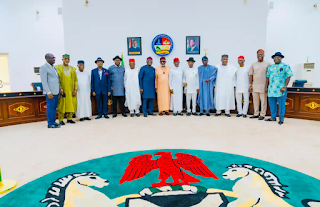 Southern governors may meet with President Muhammadu Buhari after his return from the official trip to France, Thisday reported.

The Punch also cited a source in the Southern Governors’ Forum as confirming that arrangements were being made for the governors to present their resolutions at their meeting in Asaba, the Delta state capital, to the president.

Legit.ng recalls that governors in the 17 states of Southern Nigeria had earlier met in Asaba, Delta state.

At the meeting, the governors led by the governor of Ondo State, Oluwarotimi Akeredolu, came up with a 12-point resolution, including a ban on open grazing in the southern region and a call for restructuring. The Punch also cited a top government official in Delta state as confirming the planned meeting.

Speaking to State House correspondents at the Presidential Villa, Abuja, Lawan said it was wrong for elected officials to lead such agitation. In another report, the House of Representatives has described as false some media reports claiming its Speaker, Femi Gbajabiamila, is opposed to the call for the restructuring of the country by southern governors.