Alaba signs for Real Madrid from Bayern - The Naija Weekly 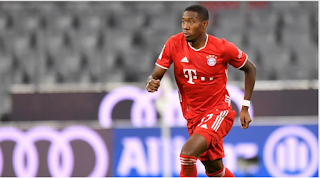 Austria international David Alaba has signed for Real Madrid, the La Liga side said on Friday, joining as a free agent after spending more than a decade with Bayern Munich.

The versatile 28-year-old defender has agreed a five-year contract and will be presented after the European Championship which runs until 11 July, Real said in a statement.

Alaba is the club's first signing for the next campaign after a disappointing season in which they lost out on the Liga title to neighbours Atletico Madrid and were beaten in the Champions League semi-finals by Chelsea.

The Austrian can also provide cover for left back Ferland Mendy or be used in central midfield should Real's next coach wish to relieve the strain on Casemiro, who has got used to playing practically every game in the last few seasons.

Alaba, who joined Bayern's youth set-up in 2008 and made his Bundesliga debut in 2010, revealed he was leaving the club back in February, saying he "had decided to do something new".

Bayern withdrew a contract offer for Alaba in November after talks dragged on for months over the player’s annual salary.