Another volcanic eruption occurs in DR Congo - The Naija Weekly 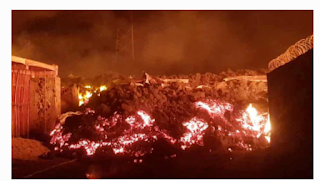 A low-intensity volcanic eruption was reported on Saturday in the northern flank of Mount Nyamulagira in Goma region in the eastern Democratic Republic of the Congo (DRC), the government said.

“A low-intensity volcanic eruption was  reported in the northern flank of the Nyamulagira, Lava flows into an uninhabited area within Virunga Park’’ DRC’s Ministry of Communication and Media said in a tweet.

Goma, the capital of DRC’s north-eastern province of North Kivu, is home to two active volcanoes namely Nyamulagira and Nyiragongo.

The Mount Nyiragongo volcano erupted on May 22, killing at least 32 people, according to the local government.