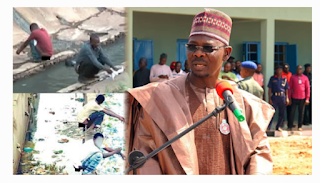 The Nasarawa State Government on Saturday, said it would prosecute anyone caught defecating openly in the state.

Musa Ibrahim, Commissioner for Environment and Natural Resources, disclosed this to reporters in Lafia while monitoring the May edition of the state’s monthly environmental sanitation exercise.

The commissioner lamented that some people still defecates openly despite the ban by the Federal Government and domestication of the ban by the state government.

“We have in collaboration with traditional rulers and other stakeholders carried out sensitisation against open defecation,” he said.

Mr Ibrahim said that anybody caught defecating openly would face the full wrath of the law no matter how highly or lowly placed in the society.

“We are left with no  other option than to invoke the relevant sections of the law against anyone found culpable,” the Commissioner added.

Speaking on the flood early warning equipment inaugurated by Governor Abdullahi Sule at Umaisha community in Toto Local Government Area, the Commissioner said it would assist in averting the effect of flooding.

He noted that the equipment would alert the relevant agencies of Government on likely flooding to enable actions to be taken before it occurs.

“We are currently training staff of the ministry on how to operate the machine for the benefit of the state,” he said.

He urged the public to always keep their environment clean to guard against outbreaks of diseases.