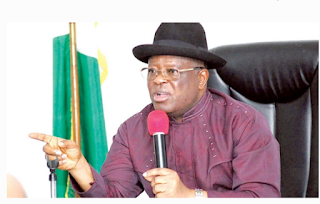 Governor David Umahi of Ebonyi has described the death of Chief Of Army Staff, Lieutenant-General Ibrahim Attahiru as a “national disaster” and a “colossal loss” that should be investigated immediately.

The governor made the remark in his condolence message to President Muhammadu Buhari on Saturday.

Mr Attahiru and 10 military officers perished in Kaduna as a military aircraft conveying them from Abuja tried to land at the Kaduna Airport Friday evening.

Reports say the aircraft had been diverted from landing at the nearby military base due to bad weather.

“We are saddened by the unhealthy news of the air crash leading to the death of the Chief of Army Staff and other crew members onboard on Friday.

“The development is not only shocking but also a national disaster of monumental and colossal loss.

“I call on Nigerians to pray for the repose of the souls of the gallant members of the Armed Forces, who have died while on duty,” Mr Umahi said.