AUDIO: El-Rufai accuses Ganduje of bribing NLC leaders to cause mayhem in Kaduna - The Naija Weekly

AUDIO: El-Rufai accuses Ganduje of bribing NLC leaders to cause mayhem in Kaduna 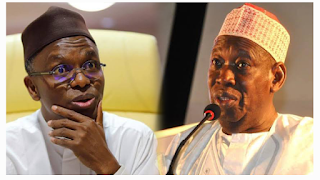 AUDIO: El-Rufai accuses Ganduje of bribing NLC leaders to cause mayhem in Kaduna

The duo have been engaged in longstanding public and private spar over party and governance issues.

The NLC and its affiliate unions shut down major economic activities in Kaduna earlier in the week following the mass sack of civil servants by the Kaduna State Government, eliciting tensions between labour leaders and Mr El-Rufai.

Messrs El-Rufai and Ganduje, though, of the same political party, APC, have been locked in a political feud for a while.

When the now-suspended strike commenced on Monday, essential services such as electricity, banks and markets were shut, as protesters were led by NLC along major streets in the Kaduna metropolis.

Mr El-Rufai, who insisted his government would not back down from its decision, declared the NLC President Ayuba Wabba wanted for economic sabotage.

“Ayuba Wabba & others of NLC Headquarters declared wanted for economic sabotage & attacks on public infrastructure under Miscellaneous Offences Act. Anyone that knows where he is hiding should send a message to the Ministry of Justice, Kaduna State Government. There will be a handsome reward!” The governor posted on Twitter.

The protest took an ugly dimension on Tuesday when thugs attacked and stoned protesters who converged at NEPA roundabout in Kaduna capital city.

Mr Wabba accused the state governor of sending the thugs to throw stones and weapons at the protesters.

“Today is a very sad moment in the history of democracy in Nigeria. Early in the morning today, we got credible information that El-Rufai has hired one Alhaji Hassan and some thugs to come and attack us.

“While we are here, they came but thank God we have chased them away because we have the number. We are not thugs and we are not using thugs, we are Nigerian workers,” Mr Wabba told Channels Television.

However, in the audio obtained by Peoples Gazette, Mr El-Rufai confirmed the chairman’s claim of sending thugs, stating that he thought they would have been able to neutralise the protesters.

“Nobody wants to confront the union. I’m the only bad politician in Nigeria, this whole thing is being financed by Ganduje. They came from Kano. When they got to Kano, they got paid and they came here,” the governor said.

Although it is unclear why Mr El-Rufai accused Mr Ganduje of funding the protest, the duo have been engaged in longstanding public and private spar over party and governance issues.

Mr Ganduje’s hobnobs with the former governor of Lagos State, Bola Tinubu, whom Mr El-Rufai has publicly derided on a few occasions.

Mr El-Rufai also crossed Mr Ganduje over the dethronement of his friend, Sanusi Lamido Sanusi as the Emir of Kano.

The deposed emir was rescued by Mr El-Rufai from Awe, a town in the backwaters of Nasarawa State where he was banished to by the Kano State Government.

Mr El-Rufai then swiftly appointed Mr Sanusi as Chancellor of the state’s university just after he also tapped him into the board of Kaduna Investment and Promotions Agency (KADIPA), a move seen as a slight on Mr Ganduje.

The governors have also engaged in public spar over insecurity and  deportation of Almajiris due to COVID-19 between the two neighbouring states.