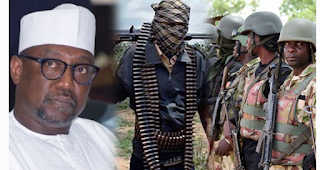 The governor disclosed this on Tuesday shortly after a meeting with security chiefs at Government House in Minna.

Mr Bello told journalists that the military recorded the casualties in the battle that lasted for over one hour.

“Two bodies of bandits killed during the fight in the area were also recovered on Monday, while the bandits managed to escape with the rest,” he said.

The governor described the latest onslaught on the state, especially against the military, as unfortunate.

Mr Bello added that soldiers and a group of armed bandits on Monday night engaged in a gunfight leading to the death of the three soldiers.

However, he revealed that the Nigerian Army was on a manhunt for the bandits, assuring that they will be arrested soonest.

Mr Bello disclosed, during a security meeting attended by the commissioner of police, the army, Civil Defence, and the SSS, that despite banditry in Niger, normalcy was returning to some communities recently sacked by the bandits.

“No fewer than 50 communities have been resettled back in the villages.

“They were led back to their villages by the armed soldiers,” he said.

The governor, however, said that now that the rain has started, the people who are predominantly farmers would go back to their farms and start planting.

He said this had become necessary because all the affected communities in the three local government areas of Shiroro, Munya and Rafi are major agricultural communities.

The governor added that farming would commence in earnest with the security cover by the military, allaying the fear of food shortage next year.

In another development, the governor said security agencies had been put on red alert to deal with youth restiveness that has engulfed Minna in the past week.

“The youth restiveness we have been witnessing in Minna, the state capital, in the past few days is very embarrassing.

“We discussed this development extensively at the just concluded security meeting, and I have directed that anybody caught with cutlasses or any other dangerous weapons should be arrested immediately and dealt with accordingly,” said Mr Bello.

Some youths from different communities in Minna had been on the rampage in the past week, using dangerous weapons to unleash terror on residents.

It took the intervention of a combined team of security operatives mobilised from various formations to bring the situation under control.