In Nigeria, the trending slogan "cut soap for me" is used to seek support from friends and allies.

Kalu, a former governor of Abia state, is a die-hard Gunner, with the business mogul once saying he might take a staggering 35% stake of the Premier League club.

Chelsea, under Tomas Tuchel, have seen a remarkable rise from an underdog to a European powerhouse, with the London side now securing a spot in the Champions League and FA Cup finals.

The Blues defeated Manchester City at the Etihad Stadium on Saturday, May 8, after Marcos Alonso secured a late winner to delay the Citizens' EPL trophy celebration.

Arsenal, on the other hands, were given a marching order out of the Europa League by Spanish side Villarreal, with the Gunners now sitting 10th on the EPL log. 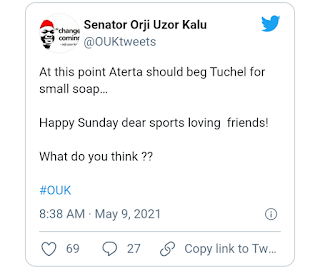 Kalu, who is a chief whip of the Nigeria Senate, in a tweet on Sunday, May 9, begged Arsenal manager Arteta to seek for "small soap" from Tuchel whose side has been remarkable since he took over in January.