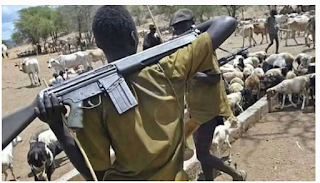 Over 100 people have been reportedly massacred by killer herdsmen in Katsina-Ala Local Government Area of Benue.

The attackers breached the community on Friday night, burning residential houses, destroying farms, and continued killing people for the rest of the weekend, the Guardian reported. Witnesses said Nigerian security forces did not intervene throughout the attack, despite lasting for over two days.

A spokesman for the police in Benue did not immediately return a request seeking comments from Peoples Gazette. A phone call to the Nigerian Army did not connect on Tuesday morning.

Mr Atera decried how his people scampered for safety as the armed herdsmen shot indiscriminately, littering the communities with dead bodies.

After a brief pause in hostility, violence surged again across Benue after President Muhammadu Buhari warned last month that Governor Samuel Ortom should cooperate with his regime and accept the controversial ruga policy to sustain peace.

But Mr Orton had rejected the policy describing it as deceptive and against the interest of Benue indigenes — who are predominantly farmers. Other southern states also rejected the ruga arrangement proposed by Mr Buhari, saying it was a ploy to expropriate lands in southern parts of the country to nomadic Fulani herders.

“Benue under the Ortom administration ought to cooperate with the federal government in the implementation of a number of national strategies programmes in addressing underlying issues militating against peace, progress, and development.

“This can still get done when the interest of the people is placed above all other interests. A government voted into office by the people should treat the people as its masters and not as its servants,” the regime said.

On Monday, Mr Shehu announced again that construction of settlements for herders will resume across the country soon, marking yet another indication that the regime was not ready to back down on the policy despite widespread opposition.