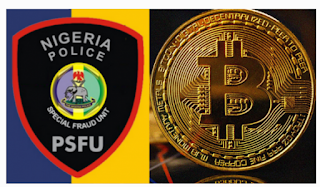 The Special Fraud Unit says it has nabbed a 21-year-old Nigerian for defrauding bitcoin investors of N2 billion.

Mr Joshua was arrested following petitions to the SFU by several investors.

“Mr Dominic Joshua, a 21-year-old native of Ebonyi state, operates from Uyo. From there, he used to lure his victims on Social Media platforms such as Instagram, Facebook, and LinkedIn as well as via newspaper publications.

“There, he usually claimed to be a financial investor of repute that manages funds for individuals and companies.

“Victims were conned to invest in bitcoin, forex trading, real estate, and oil and gas with a promise of prompt and accurate 60 per cent return on investment per month on every sum invested, plus a guarantee of the invested principal,” said the SFU.

According to Mr Johnson, funds that belonged to over 500 investors were diverted by the suspect to sponsor extravagant lifestyles, parties, buying exotic cars, luxury watches, real estates in Abuja, Lagos, and Port Harcourt.

The SFU spokesman added that the suspect confessed to the crime but pleaded for time to return the funds.

Mr Johnson said some of the property purchased with the diverted funds had been recovered as exhibits. He also revealed that the suspect would be charged to court soon.