Breaking: Hoodlums on rampage in Mile 12 - The Naija Weekly

Breaking: Hoodlums on rampage in Mile 12 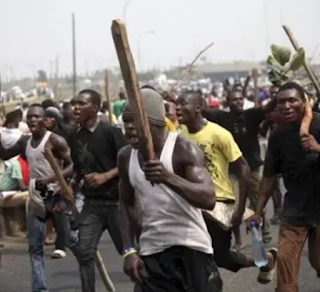 Palpable tension has gripped residents of Mile 12 area of Lagos State as two factions of hoodlums went on a rampage.

The cause of the clash is yet to be ascertained at the time of filing this report.

Members of the two groups were seen with assorted dangerous weapons.

Residents and passers-by scampered into different locations as the hoodlums engaged each other.

The image maker in charge of the state police command, Muyiwa Adejobi, has confirmed the incident.