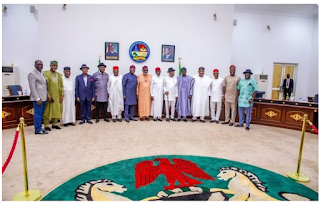 Southern Governors have banned open grazing in 17 Southern States of the Federation.

This was the outcome of a meeting that lasted for almost two hours at the Delta Government House in Asaba on Tuesday.

They noted development and population growth had put pressure on available land and increased the prospects of conflict between migrating herders and local populations in the South.

A communiqué read by chairman of the Forum and Ondo Governor, Rotimi Akerdeolu said: “Given this scenario, it becomes imperative to enforce the ban on open grazing in the South (including cattle movement to the South by foot); recommended that the Federal Government should support willing States to develop alternative and modern livestock management systems.”

They also challenged the Federal Government to urgently restructure the nation to address the rising agitations and insecurity across the Federation.