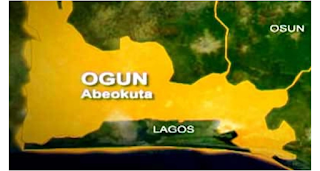 A map of Ogun state

Unknown gunmen have abducted a businesswoman, Roselyn Edusi, and her male guest on Saturday, on a farm near Ofada, Ogun State.

Our correspondent gathered that Edusi, who is the proprietress of a restaurant at Omu, in the Obafemi-Owode Local Government Area of the state, was accompanied by her male guest to a farm in the area when they were kidnapped.

The abduction reportedly happened on Saturday afternoon and their whereabouts have not been known.

Oyeyemi said the kidnappers abducted the woman and her guest who visited her from Lagos State.

He however said no ransom had so far been demanded by the abductors.