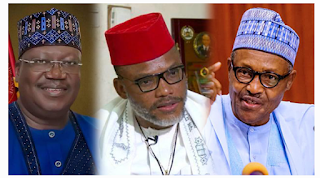 Senate President Ahmad Lawan has given legitimacy to the calls for secession.

Mr Lawan also pointed out that he considered agitations for the country’s restructuring as genuine. However, he castigated southern governors for adding their voice to the demand for a restructured Nigeria.

Mr Lawan, who fielded questions from journalists in Abuja on Thursday, urged the governors to pay more attention to restructuring their states by working hard to provide good governance to the citizens.

According to him, the southern governors can be guilty of what they accuse President Muhammadu Buhari of not doing.

“But I believe that when somebody calls for improving the structure that we have is a genuine call.”

Mr Buhari’s regime had proscribed IPOB for its secessionist agenda. IPOB has consistently called for the South-East to secede from Nigeria and become the Biafra Republic. IPOB’s leader Nnamdi Kanu, once arrested and released on bail fled to the UK. He is considered a fugitive by Mr Buhari’s regime.