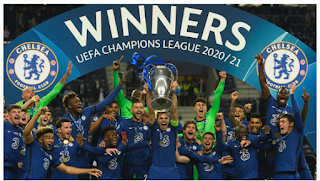 Chelsea Football Club clinched its second ever UEFA Champions League title on Saturday after a lone goal victory over English Premier League Champions and rivals Manchester City in Porto.
A first half goal by Chelsea’s record signing, Kai Havertz, was enough to deny the Citizens their first champions League trophy.
The goal came in the 42nd minute when German youngster, Kai Havertz latched on to a pass from Mason Mount to roll the ball past City goalie Ederson before slotting into an empty net.
The Blues, for most part of the encounter, controlled the pace of the game with manager Thomas Tuchel’s tactical prowess outclassing that of City’s Pep Guardiola.
Opportunities for Chelsea to widen the goal margin came the way of Timo Werner on two occasions but was wasteful with both clear-cut chances.
City’s efforts in the second half to get back into the game proved abortive and matters got worse after Kevin de Bruyne got injured following a clash of heads with Antonio Rudiger which ended his contributions for the night.
The London club’s victory over City on Saturday makes it their third win over the citizens in just six weeks.
People's Gazette
Tags # Football News
Share This