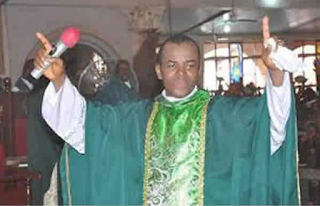 The confusion started on Wednesday when a group, Ohanaeze Ndigbo Youth Council Worldwide, claimed that the whereabouts of Mbaka is unknown.

“We are giving the Federal Government 48 hours to produce the priest, else they should be ready to face Igbo youths. They were dining and wining with him all along and now that he told the truth, they are no longer comfortable with him.

“Let nothing happen to Rev. Fr. Ejike Mbaka. It will not be in anybody’s interest,” the group said in a statement by its president, Mazi Okwu Nnabuike.

When officials of the Diocese of Enugu, to which Fr. Mbaka belongs, were contacted, some of them said he was not missing while others said they cannot confirm his whereabouts.

Reno Omokri, a former media aide to ex-president Goodluck Jonathan, tweeted that Mbaka could have been arrested by security operatives.

However, The PUNCH could not immediately confirm the claim.

He tweeted, “Reverend Father Mbaka has very strong honesty issues that he has to resolve with His Maker.

“However, I am against any arrest or attempt to infringe on his freedom by the @MBuhari

regime. Reports of his arrest by unknown gunmen, if true, are condemned. #FreeMbakaNow!!!”

The Department of State Services said Mbaka is not in its custody.

“He (Mbaka) is not with the DSS, please,” a spokesperson for DSS, Peter Afunnaya, said.

Meanwhile, there was a reported protest in Enugu State over an alleged arrest of Mbaka by a yet-to-be-identified security operative on Wednesday.

In a video sighted by our correspondent, some residents were seen marching to the Catholic Bishop of the Enugu Diocese, causing gridlock.

Mbaka had in his recent criticism of the Federal Government said disaster was lurking in Nigeria.

The pastor warned Major General Muhammadu Buhari (retd.)’s regime that he (Mbaka) would be the last person they would fight, adding that heaven’s anger would fall on them should they try it.

“The last person this administration should fight is Father Mbaka because if they speak against me, the anger of heaven will be upon them and how they will end will shock everybody,” he had said.

The cleric claimed that the Presidency was attacking him because he blessed, Nnamdi Kanu, leader of the proscribed Indigenous People of Biafra.

“If they are worried that I am blessing Nnamdi Kanu, wherever he is, God is blessing him. He is breathing; that he sleeps and wakes up, is it not blessing? Or is he not my brother? Spiritually, is he not my son? So what is their problem? They are busy branding people and communities terrorists. “If what is happening in Kaduna, Kano, Nasarawa, Maiduguri, Benue, Niger; if all these places are branded terrorist states, will the whole Nigeria not be branded a terrorist country? If anybody says the truth, the person becomes a terrorist,” he added.

“They should be careful because the insecurity I am talking about can affect them. Even the Shehu Garba who is talking, the bandits can come and kill him,” he added.