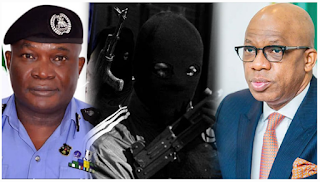 he police in Ogun have warned hoodlums planning to attack stations in the state to shun such intentions in order not to face wrath of the law, spokesman Abimbola Oyeyemi said on Sunday in an interview with the News Agency of Nigeria.

Mr Oyeyemi said that the warning had become necessary to criminals and hoodlums due to ongoing attacks on police stations across the country by unknown gunmen.

Unknown gunmen have been on rampage attacking police stations and other security formations in the country, especially in the South.

Over the weekend, unidentified gunmen attacked police stations in Rivers  and Akwa Ibom , killing police officers and carting away their arms.

There have also been attacks in Kogi, Imo, Anambra, Ebonyi and Ondo recently.

Mr Oyeyemi assured that the state police command have put in place measures to prevent such attacks on police stations in the state.

“We are battle-ready for anyone planning to attack any of the stations in the state.

“Anyone embarking on such deadly attack should know that they are on a suicide mission,” he said.

The spokesman advised residents to always provide the police with timely and credible information that could help to stem the crime rate in the state.