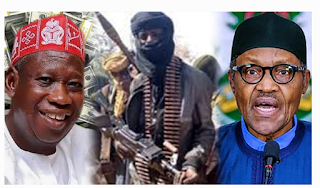 Governor Abdullahi Ganduje has advised Nigerians not to leave the deterioration of the nation’s insecurity in the hands of President Muhammadu Buhari and governors.

“Security is everybody’s business and should not be left to the government alone,” said Mr Ganduje.

He also has urged Muslims to use the period of Eid-el-Fitr to pray for peace and stability of the country.

Mr Ganduje made the call while briefing journalists shortly after observing the Eid prayer at Kofar-Mata praying ground in the Kano metropolis on Thursday.

He called on Nigerians, irrespective of their religious background, to continue to pray for peace and unity in the country.

“I also urge Muslims to remain steadfast and imbibe the culture of compassion, honesty, and peaceful coexistence,” the governor urged.‎

‎The governor expressed gratitude to God for his “innumerable mercies” that made it possible for him to witness “this blessed day.”

Mr Ganduje maintained that the security of lives and property was everybody’s business.

In his sermon, the Chief Imam of Kano, Sani Zahradeen, urged Muslims faithful to pray for an end to insecurity in the country.

‎Mr Zahradeen admonished Muslims faithful to use the good teachings of Eid to promote love and brotherhood as well as live in peace with one another.‎