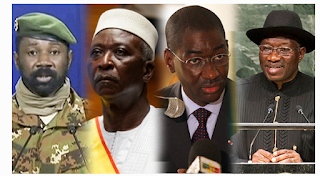 The Economic Community of West African States (ECOWAS) has suspended Mali from the regional bloc, following the refusal of the country’s military junta to abide by the mediation offers of the region led by Goodluck Jonathan.

Led by Ghanian president, Nana Akufo-Addo who is Chairman of the Authority of Heads of State and Government of ECOWAS, the sub-regional body made the decision on Sunday at an ECOWAS emergency extraordinary summit in Accra, Ghana.

Nigeria’s president Muhammadu Buhari had jetted off to Ghana on Sunday to attend the meeting which was convened to discuss the recent political instability in Mali.

The meeting became necessary after the Malian junta on May 24, overthrew the interim government by arresting and detaining the country’s transitional president Bah N’Daw and prime minister Moctar Ouane following a cabinet reshuffle of which two members of the junta were casualties.

However, before the emergency meeting took place, a Malian court on Friday declared as new interim president, the junta leader, Colonel Assimi Goita who was serving as vice president when he orchestrated the coup.

Speaking to journalist after the meeting, Ghanian foreign affairs minister, Shirley Ayorko Botchwey based the decision to suspend Mali on the coup plotters’ refusal to adhere to mediation efforts by ECOWAS after the ultimatum given to the Colonel Goita-led junta to return power to a civilian elapsed.

The latest coup in the country made it the second in nine months after the junta had in August 2020 overthrown the democratically-elected president, Ibrahim Boubacar Keita.

Former Nigeria president Goodluck Jonathan who is ECOWAS special envoy had behind closed doors briefed the meeting on his findings from his trips to Mali last week.

Nigeria had condemned in strong terms, the coup in Mali as it called for the immediate and unconditional release of the detained civilian officials.