Eden Hazard ‘wants to return to Chelsea this summer’ 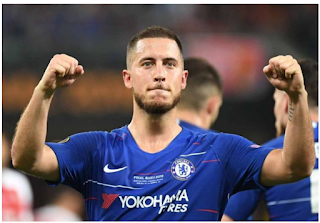 In a link that I cannot say I am surprised to be writing due to the circumstances, reports now suggest that Eden Hazard is ready to quit Real Madrid this summer.

The former Blues winger has had a torrid time since making his ‘dream move’ to Madrid from Chelsea, and now the media are going crazy with suggestions he will head out the door this summer.

The latest report comes from El Chiringuito reporter Edu Aguirre who reportedly made the claim on their show yesterday, as reported by Madrid Zone.

He claims that Eden Hazard has decided that he wants to leave Real Madrid and ‘wants to return to Chelsea this summer’.

🚨🚨| Hazard has made his decision. He's unhappy at Real Madrid and wants to return to Chelsea this summer. @EduAguirre7 #rmalive

Hazard has suffered with injuries this season and that has hampered his time, but other than that he has really not shown the class and ability that saw him become a Chelsea legend in most fans eyes at Stamford Bridge.

A return on the cards? I highly doubt that, but as I always say in this business, you can never say never.