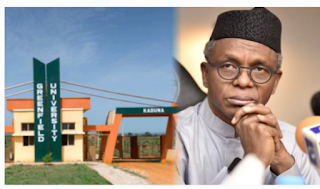 Kaduna governor Nasir El-Rufai has welcomed the release of 14 abducted students of Greenfield University who have been in captivity for weeks.

The state’s Commissioner for Internal Security and Home Affairs, Samuel Aruwan conveyed the governor’s delight in a statement on Saturday.

”The kidnapped students of the Greenfield University, who had been held hostage by armed bandits, have been released by their abductors,” Mr Aruwan said. “This was reported to the Kaduna State Government by security agencies.”

“According to the reports, at about 2:00 p.m. on Saturday, the hostages were found released on Kaduna-Abuja road.

“Fourteen persons were released in total, comprising students and staff. “he added.

The students were abducted by armed bandits in April and had been in captivity since then.

Five students were gruesomely killed by the bandits in the period for failure to pay huge ransoms demanded.

Nonetheless, Mr El-Rufai held strong his stance against negotiating for the release of abducted persons with the bandits and even threatened sanctions against anyone who did so.

Parents of the abducted students however called his bluff, insisting on negotiating the release of their children.

It is not immediately clear if the demands of the bandits were met before the release of the students.

The police spokesman in Kaduna, Mohammed Jalige, who confirmed the release on Saturday said details were still sketchy, saying it would be communicated later

Mr El-Rufai, however, assures the students that the bitterness of the last few weeks was over, adding that it would set the backdrop for positive achievements in their lives, as he wished them well for the future.