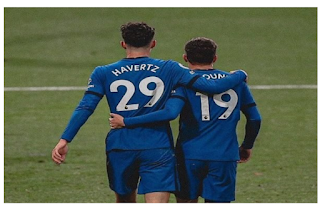 The German, one of five changes in between the Blues’ Champions League semi-final legs against Real Madrid, latched on to Mason Mount’s through ball to give them an early lead.

He doubled their advantage when he finished after a one-two with Timo Werner.

In between those efforts he also had a goal correctly ruled out for offside.

Fulham had plenty of chances in the first half with Antonee Robinson and Ola Aina forcing good saves from Edouard Mendy.

But they created nothing of note after the break and now sit nine points off safety with four games to go.

Chelsea, who just need a goalless home draw against Real on Wednesday to reach the Champions League final, have a six-point cushion over West Ham in the top four.