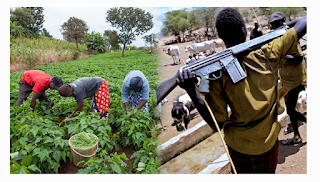 Some stakeholders in the agriculture sector have appealed to President Muhammadu Buhari’s regime to intensify efforts in curbing banditry, kidnapping, and terrorism, as these can threaten food security.

The stakeholders appealed to Mr Buhari in separate interviews with the News Agency of Nigeria on Friday in Abuja.

They noted that the recent increase in kidnapping and banditry had made many farmers run from their farmlands in search of safe hideouts.

Mr Ikonne noted that dialogue remained critical in addressing issues of insecurity and herders, adding that a peaceful dialogue between farmers and herders would prevent future clashes.

“I believe that the herders want their cattle to be healthy so they can sell and make a profit. What this means is that they also want a conducive environment to do their business.

“So, NALDA is going to engage them and the communities; we will create an avenue where they can feed their cattle so that we all can live in peace,” he said.

Mr Abubakar, however, stated that more needed to be done to sustain the achievement, noting that one of such was to provide a good environment for farmers.

He said to achieve the desired environment, kidnapping, banditry, and terrorism must stop.

“Our farmers can not go to their farms because of fear of being kidnapped, robbed, and killed,” Mr Abubakar said.

He called on Mr Buhari’s regime to sustain the ban on maize importation to boost local cultivation and encourage farmers.

Salamatu Garba, Executive Director of Women Farmers Advancement Network, explained that despite the continued deterioration of the country’s insecurity, farmers across the country toiled hard to ensure food availability.

Ms Garba added, “We thank the president for giving agriculture an atmosphere to grow. But we need the government to protect the lives of the citizens because it is only when there is life that we talk of food.”

Also, Peter Dama, National Chairman of Rice Millers Association of Nigeria, noted, “The issue of insecurity, importation of food items grown in the country, should be stopped. Nigerians have the responsibility of safeguarding the investments and economy of this nation for our progress.

“We also enjoin Nigerians with useful information on rice smugglers, to always reach out to security agencies so that these economic saboteurs are apprehended.”