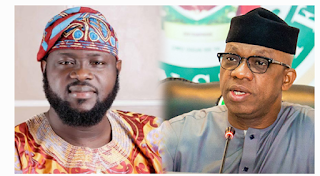 Abidemi Rufai, a longtime associate of Governor Dapo Abiodun who currently serves as his top aide on special duties, has been arrested by the Federal Bureau of Investigation in the United States for his role in a $650 million (N312 billion) employment fraud.

The Seattle Times reported that Mr Rufai was apprehended in New York on Friday as he attempted to flee the country.

Mr Rufai appeared before a federal court Saturday on charges alleging he used the identities of more than 100 Washington residents to fraudulently receive over $350,000 in unemployment benefits from the Washington State Employment Security Department during the COVID-19 pandemic last year.

A detention hearing was scheduled for Wednesday.

Mr Rufai has lived in Lekki, Lagos, for years as Mr Abiodun’s neighbour and business partner. He appointed him as a special duties aide when he became governor, a position Nigerian political elite usually reserve for trusted associates.

Mr Abiodun himself was exposed as a certificate forger after he falsely claimed to have attended colleges and filed fake documents of his several schools. He was never prosecuted for the offence before emerging governor and currently enjoys immunity from criminal charges as a serving governor.

It was not immediately clear whether or not the governor was involved in the fraud or knew about his aide’s exploits. A spokesman for the governor did not return request seeking comments from Peoples Gazette on Tuesday morning.

The U.S. complaint against Mr Rufai gave insight into how the pandemic-related fraud was carried out, noting that most of the fraudulent claims that hit the ESD were likely filed outside the U.S.

The complaint noted that in January, Google was issued a warrant from a federal court, allowing investigators to search Mr Rufai’s Gmail account.

He faces up to 30 years in jail for wire fraud “in connection to a presidentially declared disaster or emergency, such as the COVID-19 pandemic.”