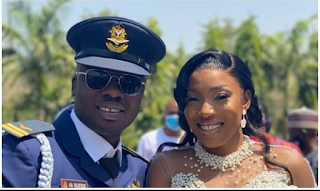 Friends, family members and associates of a Nigerian Air Force pilot, Flt Lt Alfred Ayodeji Olufade, are inconsolable at the moment as the young officer, who recently got married, died when a Beachcraft 350 aircraft crashed at the Kaduna International Airport on Friday.

Olufade and the newly appointed Chief of Army Staff, Lt. Gen. Ibrahim Attahiru, as well as nine other military personnel were onboard the jet when it crashed around 6pm on Friday. The 11 souls died in the tragic incident.

Friends and associates of Olufade have since taken to the social media to express raw grief over the sad demise of the officer.

A tweep, @Sir_KB, wrote, “My heart is in pain. I lost my friend. Flight Lt. AA Olufade. He got hitched months back and often teased me to get out of the bachelorhood. Rest well Freddy.”

Also, @SodyBar stated, “Olufade is a close associate. He got married February this year. We’re all disheartened!”

“We’re all saddened by his death. Everyone affiliated with Kuje seminary will surely miss him. May the Almighty grant you eternal rest,” @EmekaWilfred wrote.

@ogunwens tweeted, “We are all in pain, may his soul and others rest in peace. May their deaths not be in vain. My family and I salute our heroes.”

“Aaaaah Alfred, hmmm this is so devastating and unbelievable. May God almighty grant you eternal rest and comfort your entire family,” tweeted another associate, @Sweetne05954276.

The PUNCH reports that at least 20 military officers have lost their lives in the last three months in three crashes involving Nigerian Air Force jets.

On Sunday, February 21, 2021, seven NAF officers died onboard a Beechcraft KingAir B350i aircraft when the jet crashed in Abuja.

Two officers were onboard the missing jet which was later declared crashed and the whereabouts of the two airmen unknown till date.