God helping us against Boko Haram: NAF - The Naija Weekly 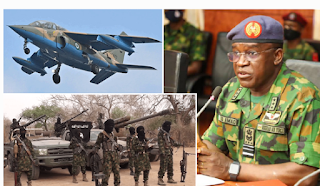 The Nigerian Air Force (NAF) says God has been helping it fight against Boko Haram and ISWAP terrorists as it reaffirms its commitment to continue to protect the nation’s territorial integrity against any form of threat.

The Chief of Air Staff, Oladayo Amao, said this in his remarks at an inter-denominational church service to mark NAF’s 57th-anniversary celebration at the Protestant Church, NAF Base on Sunday in Abuja.

Mr Amao said, “I can say without any contradiction that God has been good and faithful to the service.

“It has been able to surmount any challenges in its progress towards maturity whilst growing in size, spread, and equipment holding to fulfil its constitutional role. It is very heartening to note that from having only a few trainers and transport aircraft in its early years of establishment, NAF currently has a sizeable order of battle arsenals, comprising multiple aircraft types with capabilities to perform a wide spectrum of missions.”

He added, “We have also continued to build upon the foundations laid by our noble predecessors by re-activating several aircraft that were hitherto grounded, while also acquiring and inducting new platforms into the service as well as increasing the strength of personnel to meet national security imperatives.”

According to him, efforts are geared towards having a professional service capable of deploying effective airpower to protect the nation’s territorial integrity against any form of threat internally or externally.

Mr Amao, however, said, “Anniversaries such as this, therefore, affords us yet another opportunity to reflect, take stock and chat new ways of moving the service forward.

“This is to enable us to focus more critically on how the service can be more effective and efficient in joint operations to speedily bring to an end the security challenges in the various troubled sports across the country, especially in the North-East, North-West, and North-Central.”

He noted that NAF had done well over the past few years, as evident in the number of new platforms it acquired, such as JF-17 Thunder and A-29 Super Tucano aircraft.

“I urge you to keep all hopes alive and continue to pray for the peace, stability and development of the country and its leaders,” he urged.