‘He could genuinely not care less about Real Madrid’: Fans fume at £90m flop Eden Hazard’s reaction to Champions League exit as he jokes around with ex-Chelsea team-mates Zouma and Azpilicueta - The Naija Weekly

Home Football News ‘He could genuinely not care less about Real Madrid’: Fans fume at £90m flop Eden Hazard’s reaction to Champions League exit as he jokes around with ex-Chelsea team-mates Zouma and Azpilicueta

‘He could genuinely not care less about Real Madrid’: Fans fume at £90m flop Eden Hazard’s reaction to Champions League exit as he jokes around with ex-Chelsea team-mates Zouma and Azpilicueta 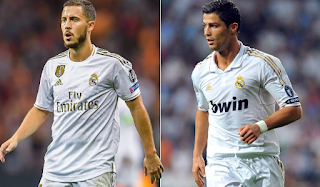 Real Madrid fans were left furious at Eden Hazard’s reaction to being kicked out of the Champions League on Wednesday night, after the Belgian was caught on camera joking around with his former team-mates moments after the final whistle.

Hazard – who returned to Stamford Bridge for the first time since his huge £90million transfer to Spain in 2019 – was seen all smiles and laughing with his former colleagues at full-time, which confirmed Madrid’s exit at the final hurdle.

It marks something of a breaking point for the forward, who has endured a miserable spell since arriving at the Bernabeu in June 2019, and now both Madrid supporters and the Spanish media appear to be turning on the star – who was supposed to be the leading light for the club carrying on from Cristiano Ronaldo.

Madrid had been saving Hazard for the crucial second leg, after he was able to make a brief cameo against the Blues in the opening fixture which ended as a 1-1 draw in Valdebebas.

Indeed, coach Zidane carefully managed Hazard’s game-time during Saturday’s victory over Osasuna, in order to have him at the optimum level to take on Chelsea. Ultimately, however, the plan would fail and Hazard would make little impact. 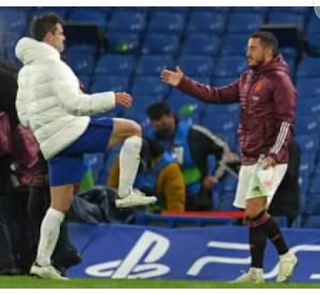 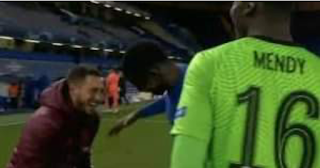 Fans of the Spanish giants wasted little time in taking to social media to express their frustration at his reaction after the 2-0 loss, which saw Thomas Tuchel’s side book their place in the Istanbul final with a 3-1 aggregate victory.

Despite Madrid’s exit, Hazard seemed in high spirits after the game and was filmed joking and hugging Frenchman Kurt Zouma, who he was known to get along well with during his time in west London.

The Madrid forward also shared an intimate moment with Azpilicueta, and appeared to wish him well for the final in Turkey against Premier League rivals Manchester City.

One fan wrote: ‘Eden Hazard just got knocked out of the Champions League and this is his reaction after the game’.

Hazard had been saved specially for the match but made little impact and was subbed late on.

While another added: ‘Eden Hazard could genuinely not care less about Real Madrid.’

Spanish daily Marca quickly republished the images of Hazard at full-time online, along with the condemning headline: ‘The image of Hazard laughing after the elimination that outrages madridismo.’

Real Madrid fans were not only disappointed by his actions off the pitch, but his performance on the pitch as well.

Having been fit for just 755 minutes of Champions League football this season, fans were hoping the return of the talisman to the squad would be inspired and help their side reach yet another European final.

Fans continued to pile in on social media to both criticise and mock Hazard – with many joking he was secretly playing for Chelsea the whole time.

Other supporters shared the same opinion, writing: ‘Hazard played against Real Madrid and this is evidence. How can you be laughing this hard when you just lost a #UCL Semi final?’

Hazard still has three years remaining on his lucrative five-year deal which he signed in Madrid, and is understood to be the club’s highest earner behind captain Sergio Ramos and Welshman Gareth Bale.

The Belgian scored 110 goals in 352 games for Chelsea after joining from Lille in 2012.

He brought an end to his Chelsea career in spectacular fashion before signing for Madrid, scoring twice as the Blues won the Europa League final in his last game with the club.